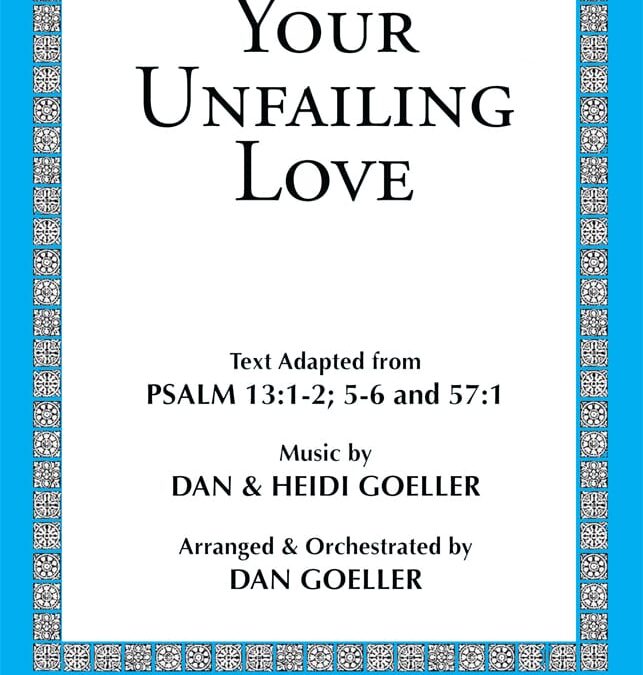 On September 1st of 2007, Heidi’s extended family gathered together for the burial of her Aunt Julie’s ashes. Auntie Julie, as we called her, died on November 3rd, 2006 after a year-long battle with cancer. She was only fifty-four.

Even after almost a year of grieving the loss of his wife, Uncle Bill still seemed as emotionally raw as he did at the funeral service the previous November. After burying Julie’s ashes, Bill commented to me and Heidi that Psalm 13 had become a strong focus of his attention. Bill wondered, “How long did it take David to go from the honest, grief-stricken, pleading portion of a Psalm until he came around to the resolution at the end?” Bill added that although his faith told him God was in control of the situation, his emotions still felt trapped in that first part of the Psalm.

After reflecting on what Uncle Bill shared with us, Heidi and I began discussing the possibility of using the Psalm 13 text for a new anthem that had been commissioned by the youth choir at the Church of the Resurrection in Kansas City. I spoke with Joyce Blakesley, the director, and told her that Heidi and I were considering this text. Joyce agreed that Psalm 13, although very serious, would make a good text for the youth to sing. We both commented that despite their brevity of life experience, teenagers experience all of the same range of emotions that we (adults) do. And as Randy Edwards (director of YouthCUE) has often commented to me, “A choral piece containing a promise from God is one of the most powerful texts any youth choir will ever sing.”

And so the work of composing a choral setting of Psalm 13 began. As Heidi and I studied Psalm 13 (and some other complementary Psalm texts), we tried not to shy away from that raw emotion that Uncle Bill described. “How long will You hide Your face from me? How long must I have sorrow in my heart? How long will I wrestle with my grief? How long, O Lord, how long?” (Psalm 13:1-2). But we also tried to express the assurance of God’s faithfulness. This sentiment is so eloquently expressed by David in Psalm 57. “Have mercy, O God. Have mercy on me. Have mercy, O Lord, in You my soul finds rest. I will take refuge in the shadow of your wings until the storm has passed” (Psalm 57:1). Finally, we tried to express the beauty of God’s love as expressed in the closing verses of Psalm 13. “So I trust in Your unfailing love. My heart will rejoice in Your salvation. I will sing to the Lord for He is good to me” (Psalm 13:5-6).

The result, we hope, is Your Unfailing Love–an anthem that will encourage choirs and congregations as much as we have been encouraged through the process of creating it.